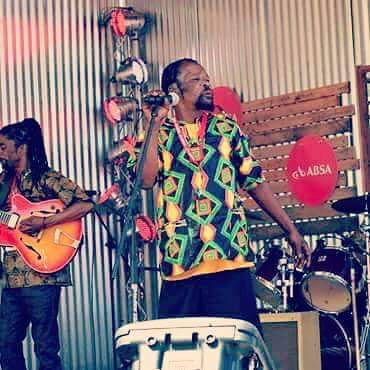 Skank and the Roots is a reggae band from Nelson Mandela Bay, Uitenhage ,kwa Langa , South Africa that was originally formed in the early 90’s by a diverse group of individuals who share the same vision and passion for music. The band has a groovy roots reggae sound, led by the energetic voice of charismatic lead singer Eric “Skank” Mooi. According to the bassist Mkhangeli  “MK” Matiwane , each original song “carries strong emotions

and a positive message.

Skank and The Roots are known for pulling people off their chairs onto the dance floor.

The band charismatic lead singer Eric "Skank" Mooi never fails to ignite the audience with his explosive stage presence. His distinct wailing voice tone is at times reminiscent of legendary Burning Spear or late Joseph Hill from Culture. Skank and The Roots over the years developed unique sound with a repertoire of original songs that have a distinctive South African flavour.

The band most memorable show was when we performed in front of late Nelson Mandela in 1993 at a packed stadium in Uitenhage . Seeing Tata Ne lson Mandela fist in the air as we were playing our Mandela tribute song "Red Spear" was an unforgettable moment.

This is what Reggae Music is all about! A good skanking vibe that touches one’s soul.” Skank was the driving force behind the formation of the band African Roots in 1990, which was later renamed Skank and The Roots. Today Sergio Dominic Naude on drums, Babalwa Phakela on Backing Vocal ,and Frank Barends on keys joined the 3 original members of African roots, Deon. Manell on guitar, Mkhangeli "MK" Matiwane on bass and Nkenke Eric "Skank." Mooi on the Lead vocal.

Our music is healthy and clean for the young and old. It appeals to people from all walks of life.

Our music is universal. We sings about peace and love, generosity and righteousness.

Skank and The Roots have also opened for International artists such as. Jean Grae (US) and IQulah (Jamaica).

Uitenhage in the Eastern Cape, holds a special place in the history of the apartheid struggle, and the Langa Memorial marks the place where police opened fire on a group of mourners commemorating the 25th anniversary of the Sharpeville Massacre which took place in 1960. On the morning of Thursday 21 March 1985, a large group from the Langa Township, gathered to march to KwaNobuhle, to attend a funeral which had been banned.

The marchers were confronted by two police vehicles and a contingent of police, while passing through the outskirts of Uitenhage along the way to KwaNobuhle. The police ordered the group to disperse, and then opened fire, killing twenty. The shooting. which became known as the Langa

3.Deon Manell on the Lead guitar

5.Frank Barends on the keys

6. Mkhangeli "MK" on the Bass guitar

Skank and The Roots Links :

We recorded a single for our song "Cool Day" at the drop n roll studio. Please have a spin and give us your feedback. Feel free to share the link to the song and spread the love. Thank you and have a cool day Pic by Ontha photography:

Check our set at the One Blood Festival.

Skank and The Roots definitely woke up the crowd at the One Blood Festival. Here is a video of their energetic performance:

Sign up and you will be the first to know the latest news, insider-only info, and more.